On October 4 and 5, the North Carolina State Conference of the AAUP held its annual meeting at the University of North Carolina at Chapel Hill. Rudy Fichtenbaum, President of the national AAUP, and Jasmine Banks, Executive Director of UnKoch My Campus, joined faculty from Appalachian State, UNC-Charlotte, Elon University, Shaw University, Duke University, UNC-Greensboro, North Carolina Central University, and UNC-Chapel Hill. We had lively, productive, and inspiring discussions of intersecting national, state, and campus-specific challenges to academic freedom and of student and faculty resistance to on-going threats.

the importance of faculty organizing, whether public employees can [legally] engage in collective bargaining or not. Faculty should recognize threats to academic freedom and shared governance, acting in solidarity against those threats. We can create a “union” of tenure-track, tenured, and non-tenure-track faculty.

to turn colleges and universities into the kinds of places that will make students true believers in free-market ideology. As Banks noted, the Kochs have learned to rebrand their efforts so as to hide their overall goal.

Banks’s talk brought to mind two questions. First, will faculty who take money from funders with a clear political agenda find themselves, even unconsciously, shaping their program in ways that keep the donor happy? If donors are displeased, they will stop supporting a program after the initial gift. Second, who would a faculty member or director not take money from? Everyone has a line they will not cross. Medical schools, for example, stopped taking money from the tobacco industry. As Jane Mayer wrote in Dark Money: The Hidden History of the Billionaires Behind the Rise of the Radical Right, the Kochs are among the major funders of climate change denial. Taking money from the Koch Foundation legitimates an organization that denies the major crisis of this historical moment.

Banks and conference attendees focused on two Koch-funded programs already established at UNC-Chapel Hill, a minor and certificate in philosophy, politics, and economics (PPE) and the Center for the Science of Moral Understanding. A Program for Public Discourse was just launched at UNC-Chapel Hill with seed money from a North Carolina donor, the Dowd Foundation, which is also funding a capitalism studies program at UNC-Charlotte. As Banks demonstrated, the justifications for such programs are strikingly similar to those presented by the Koch Foundation (see Frank Dowd’s op-ed in the Charlotte Observer) and offer more paths by which collective faculty control over the curriculum can be circumvented or coopted.

During the afternoon on October 5, a panel of faculty from Appalachian State and Elon University returned to many of Fichtenbaum’s points in their discussions of organizing for salary increases and administrative resistance. The presentations highlighted the importance of solidarity between tenure-track and non-tenure-track (contingent) faculty and of mobilizing public support for faculty.

The conference concluded by agreeing to launch this website/blog where we will periodically post North Carolina AAUP-related news and electing new state AAUP officers:

Following this successful conference, the North Carolina AAUP looks forward to expanding and protecting academic freedom on campuses across the state.

by Karen M. Booth, Associate Professor of Women’s and Gender Studies, UNC-Chapel Hill and Secretary-Treasurer, UNC-CH Chapter of the AAUP. 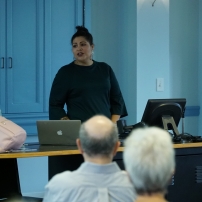